My Native Homeland, Toronto and area. 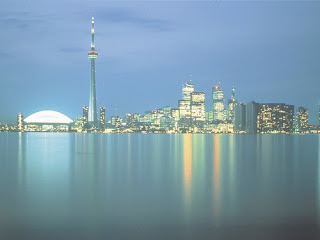 
On my Great Canadian Sentimentality Tour '07, paying homage to my birthplace was the focal point. On the way east, I stopped and worked the Port Credit Blues and Jazz Festival, staying for about a week. On the way back west, I stayed in the Toronto area, for around 10 days. I can only touch on some of the memories, for there are too many to write here on one page.


I was originally born in Weston, which is a northwest part of Toronto, Ontario (T.O.). But, I actually grew up in Peel county, just next door to the west. Our first house was out in the countryside; my father, his brother and my grandfather built it in the late '40's. In 1968, we moved down to the lakeshore community of Port Credit (P.C.), where I became a young adult. Although I didn't technically live in T.O., I consider it to in my hometown area. 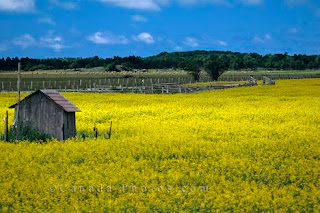 
When I started to get close to T.O., I felt my 'roots' beginning to grow. I recognized the countryside, the 'lay of the land', the woodlots and rolling fields; I knew this countryside like the back of my hand. As a youth, I cycled and hitchhiked throughout Southern Ontario. As I drove down the main highway of my home county, the wave of memories versus the present day vistas, was like being in a surreal movie. Funny, no matter how things change, they still remain the same.

Down by the lake (lake Ontario), P.C. waited for me. I cruised into town, and booked myself in the Ol' Newport Hotel. I was going to be very busy for the Festival, and I wanted a convenient location for my base, about 5 min. walk from the site. Also, it was excellent stumbling distance from all the parties of the next while. And what a hoot is was!!! 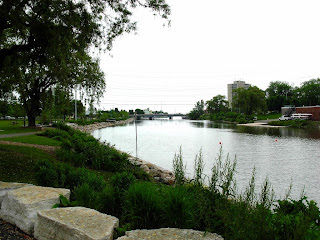 Left: Credit River down in the town. Park area to the right, was the site for the Festival.

The Festival rocked!!! Three days of blues, jazz, fusion, you name it. Buddy Guy, Downchild Blues Band, Powder Blues Band, Lighthouse, The Lincolns', Detroit Women; there were too many acts to list. Two stages featured acts from noon to midnight; and on the Saturday, we closed a main street down for the afternoon, and had over 20 acts performing spread out over 4 blocks. 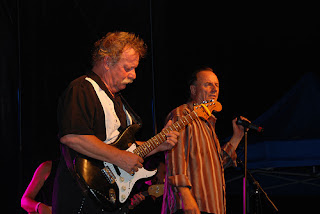 Left: Downchild's Donnie Walsh and Chuck Jackson. Chuck, originator and main organizor of the Festival, is an ol' P.C. friend. I've seen 'Chuckwagon' perform many times, most notably back in the day, with Cameo Blues Band at the 'Izzy'.


Every night, there were late night jams until 3am, in some of the local watering holes. Old friends walked up to me, shaking their heads when they recognized me. When the final show was over, I was satiated by music, past the point of no return. When it was over, and the park was completely cleaned up and back to normal, it was unreal; Was it just a dream?

On the way back from the East Coast, I visited the sights around T.O., my friends and family spread out in the area. I tracked down the family homes; my grandfather's, and my two immediated families'. My original house was long gone, torn down to make way for an expressway. My home down in P.C. was still there, but, my grandfather's house had the greatest impact on me. 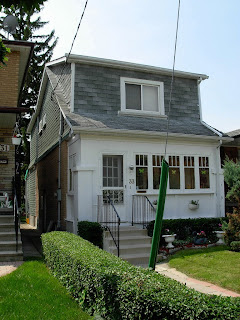 My Grandad Bill was a great guy. He built this house around 1919 ; he and grandma had just emigrated from England after WWI. My dad was born and grew up here, and as a child, we would visit them every Friday night. No longer alive, I missed them both as I stood in front of their modest house. Tears welled in my eyes as I walked away, overwhelmed by the memories.

Toronto is the centre hub of Canada. Known as the country's financial centre, it is also a multi-cultural mecca. As a young adult, I enjoyed great entertainment, different ethnic cultures and prosperous employment. For some, this city is not very friendly, but growing up here, I knew multitudes of people. Leaving here was difficult, when I originally moved away. Seeing old friends and family was very emotional to say the least. Although, I admit my life in T.O. was great, certain things about the city reinforced why I had left. The traffic was insane, and there were way too many people for me. There was always the ever-present 'hum' of the city, while I appreciate the quieter life. 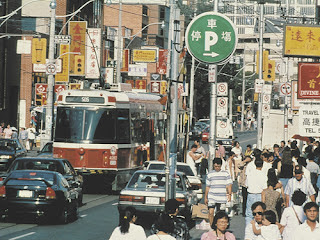 Left: Chinatown in Toronto. It's size rivals many in the States. 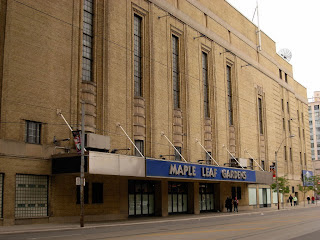 One of the qualities of T.O. I miss the most was the entertainment. The last month, before I moved away in '83, I went to concerts like The Who, U2, Roxy Music and so on. There were lots of great pubs to see bands, like the El Macombo, the Izzy, the Gasworks, the Riverside..... The old Maple Leaf Gardens was not just a classic hockey shrine to me; it was where I saw Pink Floyd during the Dark Side of the Moon tour, the Rolling Stones, the Who, George Harrison, David Bowie, and on and on. 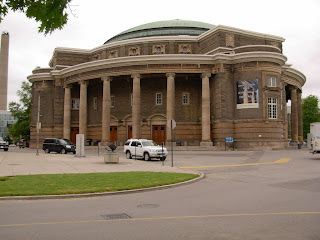 
Throughout my travels back east, i was engaged by appreciation for old architecture. Out West, there aren't many buildings that are over 150 years old, and many heritage building were not protected from being torn down. Not so in ol' T.O. I enjoyed walking through the University of Toronto grounds, where many old buildings are fully functional. One of my particular favourites is Convocation Hall. It is a fair size hall, holding around 500 people; it has a round floor, and is basically a upright cylinder shape, with a parabulum roof. The acoustics are amazing; I had the pleasure to see J.J.Cale and Sonny Terry/Brownie McGee perform here.

After runnin' around T.O. for 10 days, it was time to move on. I had done what I wanted to do, and I had satisfied my curiosity as to why I had moved away, 24 years ago. Although a great place, T.O. was too busy and crowded for my liking. I felt like I had paid homage to my hometown; time to journey back to BC. 'I'll be back, one day...', I told family and friends, over and over again. Hey, I am a Nomad, after all!
Posted by urban vandweller at 2:53 PM