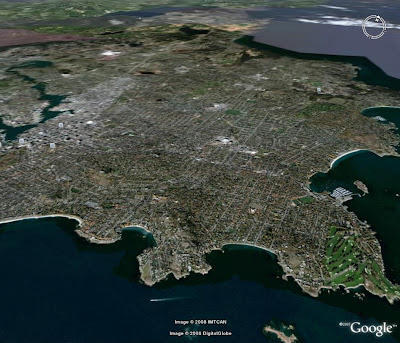 Well, here we go again. A new base. Not that I haven't been or lived here before. Just, not as a vandweller. Plenty of work, living facilities and so on. Lots to do and see and play and eat and work and date and... But, a challenge. To vandwell in a place where the homeless are being criminalized. Cuz', when it comes down to it, vandwellers are essentially considered homeless to the authorities. To exist as a vandweller in this environment, will require stealth to the max. I'll execute an organized cycle of rotating sleeping locations and maintain my appearance and schedule to look basically normal. A chameleon, hidden in plain sight.
Like I said, I've lived here before. People here mostly mind there own business, unless you are close to their homes. Then, they are nosey-parkers, watching through drawn curtains. I'm going to have to pick and choose specific locations and neighborhoods to find that perfect balance of indifference and camouflage. I've already been scouting nightspots, there are plenty and I've spent nights here. But, you've got to keep your eyes and ears open, things change continuously.
So, the new routine begins. New mailing address, change cell phone to local number, decide on sport club for showers and facility, develop driving and parking patterns for sleep, eating, hanging out, work and so on. I'll find parking places where I feel safe, or if I'm leaving the van for a long time, where it probably won't be broken into (with luck). New laundromats, new cheap eats delis and diners, new grocery stores, new gas stations, new everything. Organize. Streamline. Execute.
There's plenty of work. Important. No work, no money. No money, no fun. People I know here are already setting me up. I'm going to be here for years, so I will be seeing how far I can get. An experiment. Maybe, I can get into the government or somewhere they deal with the issues of the homeless. Then one day, I could stand and say, wait a minute, these people aren't helpless, incapable or creative. I've been working beside you for years, and you couldn't tell that I'm homeless. Surprise.
The nice thing is, if I don't like it or it doesn't work out, it really doesn't matter. There is always somewhere else down the road, the next county perhaps. I've spent the last eight months based close by, on a group of islands, with no problems.
I have a network of friends and family, on those islands. Here, I have a small, but very good network of close friends, which is important to my style of vandwelling (see old article, the network, Jan. 21). When the weather turns to the cold, rainy season (our late fall, winter, early spring), I'll have people to visit and share dinner/evenings with. I'll be able to go and visit my folks to help them out on the weekends. I'll be able to visit my buddy, Eric, and play my guitars and amps (stored there for safekeeping and convenience) in his studio. My network is important for socializing, variety and sanity.
My van is too small to be holed up in on a continuous basis, during the rainy season. There is no problem during the warmer part of the year; you can hang outdoors and be comfortable. So, I take advantage of all the conventional buildings in my area. I just try to pay minimally for the usage, you could say.
If you stay cooped up in your van, you will emanate that behaviour. Be social. Venture out and about. You'll fit in with the area more, and attract less unwanted attention. Just remember to maintain your specific level of privacy. This lifestyle requires you to somewhat operate on a need-to-know basis. Only certain people need-to-know that you are a vandweller. NO one else does, so why bother going there. It can possibly result in hassle, problems or worse. So why tempt it. Why complicate things? It's not worth it. Live your life as you want, but for me, this is my way. Your path is yours to walk.
p.s Sorry about the spacing on this post, I can't seem to edit it.
Posted by urban vandweller at 10:24 AM No comments:

Fall is Here - Time for Change

Oh, well - Summer has finally sunk beyond the horizon. The weather here on the BC coast is beginning the cooler, more rainy pattern, which means it's time to get on it. As you probably noticed during the summer, I slack off considerably. No work if I can help it. Enjoy the season to the max. Take off, eh!

For the summer, I've been bouncing around BC, my home province for the last 25 years or so. It truly is beautiful here - I'm lucky to live here. But, as a result, I've only used computers for emails, no blogging. No time. Had to fish, hike, bike, wander, canoe, play guitar, check out wildlife, go to new places, go to old places, beach it, camp out, go to music festivals, visit the cities, go see friends over there or anywhere, and so on. For the last three months or so. It's been great. But as a result, no new posts. You probably thought I fell off the face of the earth. Well, in a sense, I did.

But, fall is a sobering season. You can't just hang around outside; it starts getting wetter and cooler and darker. You start thinking about the winter and all that entails. Living indoors more. Shelter from the storm. Work (that cursed four letter word!). But, that isn't necessarily a bad thing. It's just part of the cycle of being. So, my fellow vandwellers and newbies, let's get on with it.

I'm doing some quick work on the island, where I've been sorta based on the last year or so, then I'm going to go to a major, coastal urban area to live at least for the winter. I have a plan. It's the main reason, I call myself, 'The Urban Vandweller'. You see, the place I'm moving to has been embroiled in constitutional lawsuits with regards to criminalizing the homeless. Which, is essentially what vandwellers are, according to the authorities. So, I have posted anonymously because I'm going to a conservative, anti-me city. To work, flourish, live as a vandweller, for as long in one area as I can get away with it. Without loosing my van. Which is what they will do, if they can prove you're a vandweller in Edmonton, Alberta. Well, we will see what happens in Coastal BC urban territory.

As this new adventure unfolds, I'm going to try and post very often, detailing events, trivialities, methods, trials and tribulations along the way. For those of you new to this lifestyle, my efforts are for you to see what you may be up against. For you seasoned vandwellers, well, I'm probably going to bore you to tears, but, you might get a giggle.

The US economy is in the shitter. Many people have lost their conventional homes. Alternative cheap housing is badly needed. We're sorta OK here in Canada, but housing is so expensive, that for me, vandwelling is a viable option, almost necessary so I can enjoy freedom. So, I want to see if I can stay in one urban area for years. That's right, same area, for years. I don't know, maybe five or longer. Take advantage of the savings and simplicity. As I have done before, function as a working and social person, engaged in society, and make it work again. This will begin in a month or so.

I have to do some final build out on the van, window treatments and curtains, for privacy and stealth. I haven't really required them recently, because where I've been, I didn't need them. Now I do. So, there will be some articles about the van. But, the ideas expressed above are what really excite me. I've only lived in one major urban area before as a vandweller for around one year, so to do it continuously for longer presents new challenges. We'll see.

Oh, I almost forgot to mention, we got some favourable press by a magazine writer who I helped with a article in Maclean's, a national weekly publication. Here is a link to the article, http://www.macleans.ca/culture/lifestyle/article.jsp?content=20080820_12314_12314 . I almost got on a talk radio show with CBC, our national radio network. But, I missed the boat because the programme series had moved on by the time I was in touch.

I hope all of you have had a chance to enjoy the summer. It is my favourite season. Fall is here - time for change.
Posted by urban vandweller at 10:06 AM 5 comments:
Newer Posts Older Posts Home
Subscribe to: Posts (Atom)