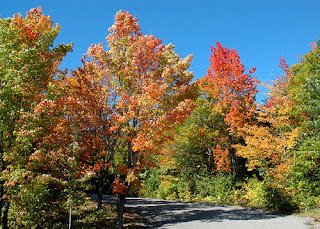 When it was time to leave Toronto, I was looking forward to the ride back to my adopted homeland, Coastal BC. But, that area is located some 3,000 miles west of Toronto, so, I had some driving to do. I wanted to spend some extra time in places I'd lived before (Banff, Jasper, Whistler), which meant I travelled quickly through Northern Ontario and the Prairies. 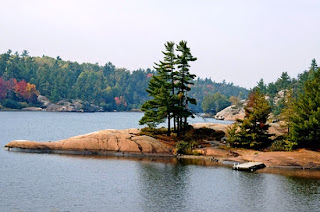 
Travelling north of Toronto and eventually heading west, you travel up and over the Precambrian Shield. This huge land mass lies across the northern area of Ontario, Quebec and parts of Manitoba. There are thousands of lakes, surrounded by rugged rocky shores, dense forest and wilderness. I spent many summers enjoying the cottage counties of Haliburton and Muskoka, while growing up in Toronto. The Shield seems to go on forever; once I got to Muskoka county, I didn't get out of this type of geography until Manitoba, over a 1,000 miles later. 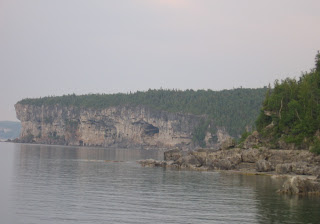 One lonely stretch of wilderness along the Trans-Canada Hwy, is between Sault Ste. Marie and Thunder Bay, skirting the north shore of Lake Superior. The highway went up and down over tall hills and deep valleys, cut by glaciers through the deep rockbed of the Shield. The shoreline displayed craggy rockfaces carved by the erosion of time. Once in a while, there would be an exposed sandy beach, in one of the many bays off the highway. This is one stretch of highway, I suggest you stay away from the semi trucks. They speed down into the valleys, to pick up momentum for the slow hill climb up the other side. I camped along the north shoreline twice; the open expanse of water is so great, you feel like you are on an inland sea. You are, they just call it a lake. The winter storms are legendary here, and the wilderness never ending. 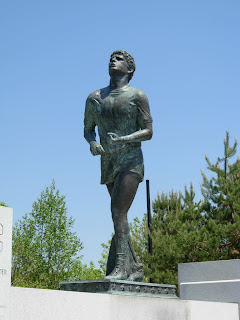 At Thunder Bay, the Trans-Canada cuts northwest up over the Shield, away from Lake Superior past Dryden and Kenora, and eventually down to the Prairies. I stopped for lunch at the Terry Fox Memorial. In the early 80's, Terry was a victim of cancer, who decided to make a great sacrifice. Despite great pain and a artificial leg, he attempted to run across Canada from coast-to-coast, to raise money and awareness for cancer research and treatment. He motivated our whole country, and the image of Terry running was on the nightly news. Unfortunately, he only made it to Thunder Bay from the East Coast; still a great achievement considering his affliction. On his memorial, a quote of his says, "Dreams are made, if people only try. I believe in miracles, I have too... because somewhere the hurting must stop."

The trip up to Dryden and over to Kenora reveals more lakes, rocky crags and thick forests. It seems like it will gone on forever, 'cus it does. Eventually though, you get through. You pass a time zone marker, and the sign says you are entering Manitoba. I stopped, got out and looked back at Ontario, my native province. My life had started there, but, I still felt it was not meant to end there. I drove on into the night west toward Winnipeg, Manitoba. 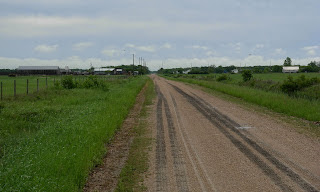 The next day, I drove north off the Trans-Canada, to the lake country of Manitoba and Saskatewan. I'd had never been to this area, and I had always wanted a quick look. The prairies are pretty flat, farming countryside, so these huge lakes have always picqued my curiousity. The region has some rolling hills, and except for some river valleys, it is mostly pretty flat. You can see for miles and miles, over the open expanse. In the lake country however, there are some huge lakes. In the glacier age, Manitoba was apparently almost completely under water. These lakes are what remain. 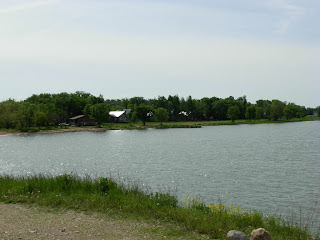 
Driving northwest from Winnipeg to the Narrows, at one point I was heading parallel of the lakeshore of Lake Manitoba, a quarter-mile to the east. But, I couldn't see it! A quarter-mile from a 50 mile wide lake, and I couldn't see it! I took the next dirt road west, drove 250 yards west, and there it was. The land is so flat, that if the water level rose 10-15 feet,it wouldn't be 50 miles wide anymore; it would 80-90 miles wide. 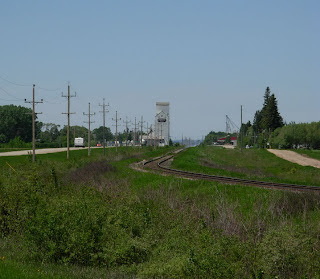 Although you would think the Prairies would be boring, actually, that's not true. A couple of valleys caught me by surprise. One was Lake of the Prairies, and the other was the Q'uappelle Valley. You would be driving along through flat farming lands, then, down into a valley by a big lake in cottage country, with different trees, water-skiing, camping, etc. If you kept going, 5 minutes later, you drive up the other side, and you are back into flat farming land again. Weird! 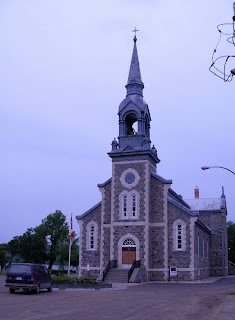 There were lots of places of interest, different areas and wildlife, I didn't realize existed on the Prairies. There was way more deer that I knew lived there; with numerous warning signs on the road. In the Q'uappelle valley, I was driving through a kinda modest town, around 100 or so rather run down houses. I look over to my left down by the lakeside, and here is a magnigicant stone church! Completely out of character with the rest of the town. It's obvious that religion is alive and well in these parts.


In the morning after camping by Lake Q'uappelle, I hiked up to high ground. There was major storm clouds to the northwest, and some clearing of the storms to the southwest. I decided to cut back down to the Trans-Canada, and cruise quickly towards Banff. It was a rainy day; you couldn't see much in the way of scenary. As it cleared later, I could see the mountains looming on the horizen. I was getting closer to my adopted homeland, the Rocky mountains of Alberta and BC. I smiled as I drove toward the sunset. Homeward bound! 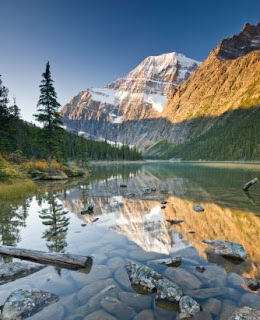 Posted by urban vandweller at 4:14 PM