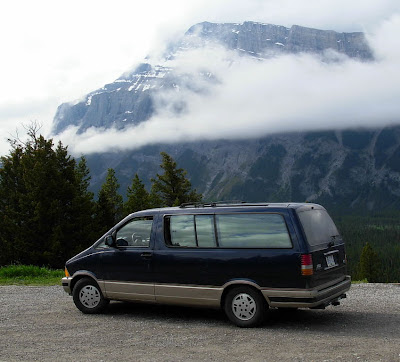 ED.Note - You can click on most of the pictures for a larger view.

After driving from the west coast to the east coast and back again, almost 10,000 miles over six weeks, I was getting closer to home. To see the Rockies looming larger on the horizon, reminded me why I had decided to move out West, 24 years ago. The raw majestic beauty of the mountain peaks drew me like a moth to the flame. Tonight I would be back in Banff, AB, and ready to reintroduce myself to old haunts.

I had originally planned to spend a few days in Banff, one resort town which had been an old stomping grounds. But, some people had moved on, and the place had really changed. Banff has started mimicking that upscale (read expensive) resort facade, I like to call 'Whistlerfied', instead of the rustic skibum scene. Saloon type bars like the Cascades (the Zoo), the original King Eddy and Silver City were gone or dandied up. I had a great time hanging with some ol' buds, but decided to leave town sooner than planned. 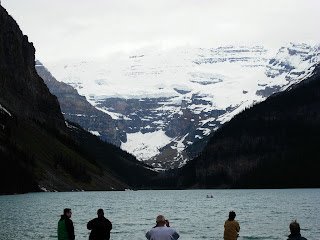 Left: View of Lake Louise, in front of the Chateau


The next day I cruised to Lake Louise, then up the Banff-Jasper Parkway past the Columbia Ice Fields to Jasper. The glacier behind Lake Louise is almost non-existent this time of year. I used to spend months back country skiing there. The photo displays the area; it's one mile to the end of the lake, but then it's around seven miles past there to the base of the mountains directly behind it. It's a really cool valley, surrounded by high peaks and full of twisted terrain. During the winters' high snowfall, there are avalanches that fall off the back peaks, sometimes 3-4 times daily. From the hotel, they look like dry ice mist or fog being poured over the top ridge, and it sounds like thunder. From on the glacier, it blows your mind, the raw power of nature. 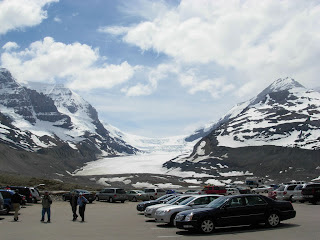 
Driving up the B-J Parkway was awe inspiring. I had to concentrate on the road, 'cuz the scenery is spectacular. You start looking around like a kid in a candy store. If you like sightseeing, cruise this highway one day. You won't be disappointed. Halfway up to Jasper, lies the Columbia Icefields, a majestic glacier that once seemed that it would cross over the highway. You can't tell from this photo, but it retreated back at least several hundreds of yards from previous positions, that even I remember. Folks, global warming is a reality and the glaciers are shrinking. I don't any proof, I've seen it.

I was looking forward to the next town, Jasper, with real anticipation. I had enjoyed living there, for almost 3 years, and it was like a homecoming. For me, Jasper and my hometown remained 'true to form' after all this time. They were the two friendliest places on the whole trip. Everyone I dealt with or visited, was glad to see me, and made feel right at home. 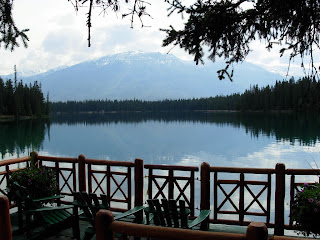 Although the Atha-B bar was no longer kickin', the Whistle Stop still rocked like the old days. I spent the first night in town partying with 'new to me' locals, went to a house party/jam and spent the night. The next day I caught up with ol' friends, and it was just great. This is a town, where you can do no wrong. Yeah!

I'd been on the open road for a long while, and was overdue for some downtime. I wanted to zigzag my way back to the coast, slowly and with deliberation. I needed to hit some back country valleys for 'stationary' solitude. I needed to let myself catch up with all the memories and visions which cascaded through my mind. 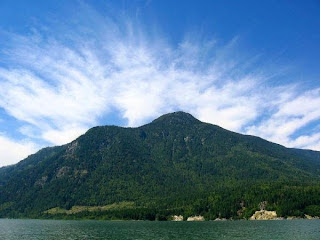 
The Arrow Lakes region of the West Kootenays is a great place to go, if you want to get away. From everything. There are a few towns, but that's not much for a couple of lakes that seem to stretch for a hundred miles between wild mountain ranges. The weather was great; dry, warm late summer. Luv it! All I can say, is the photos don't due justice to the area. Check it out if you can, one day. 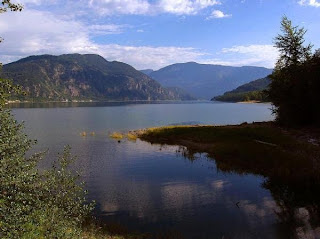 
I spent some days just camping by the lake, lettin' time slip by. Eating, drinking, playin' guitar and singing to no one, 'cept the breeze. I thought about how great it would be to have a cabin here. Or maybe somewhere in the interior of BC. I don't know, that's too hard to think about right now. Have a dip, soak up some sun and sip another beer. I ain't goin nowhere. Time has stopped. Rocky. Mountain.. High...

Someone once said, "All good things must come to an end" or something like that. It was time to get down the road. I was going to zip across the Okanagan Valley, up to the Chilcotin region then cut down to Whistler. The Okanagan Valley is BC's wine and fruit region, it's nice but I wasn't stopping this time. I wanted to get up to Clinton and Lone Butte way, before I headed down the Sea to Sky Highway, #99. 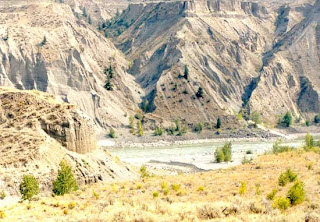 The lower Chilcotin region is way different than where I had just come from. Instead of lush thick forest, it has variations of dry arid land, and then there are lakes, rivers, forests, it just changes all around. Very cool. 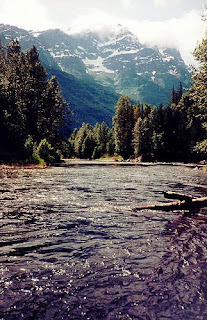 Right: A different view of the Chilcotin region, thick forests with a mountain river

Friends of mine have a ranch up this way. I stopped in over night; we did a little horse back ridin'. I was sore for days 'cuz I ride once a decade or so. This is an area I have thought about home steadin' some. It's not too far north, and it is still relatively quiet. We'll see, ya' never know. Ian and I sat around the campfire that night, playin' a little geetar. He almost had me talked into becoming his neighbor. Not yet, I still have trails to ride. 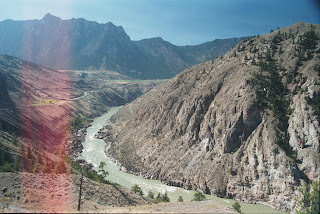 Left: Treacherous valley before Lillolet, BC

It was the last highway towards the coast. The sign read, #99, the Sea to Sky Highway. I turned right, to head toward Lillolet; at that moment I figured I just had driven around 11,000 miles on my trip so far. But this stretch of road is too cool. Chewed up twisted canyons and thick uninhabited bush is the best way I can describe it. Between Lillolet and Mount Currie, it is buried by snow for the winter. Any wildlife you can imagine, grizzlies, cougars, eagles - they all call this area home.

The canyon just before, driving by and past Lillolet is the one craziest roads I've ever ventured on. I was stoked!! Just before, in the canyon pictured above, the road snakes along the left side of the canyon. There's only a couple feet of shoulder, then the ground slopes down at a 30 degree angle and over a cliff down to the raging river below. No railing, no curb. If you drove off the road, I swear they would never find the wreckage. Later, you go through this series of switchbacks, bridges and carved out roads clinging to the side of cliffs, over the river chasm below and up the other side. I can't describe it. I wish I'd put a video camera on the dash looking forward. Wow. 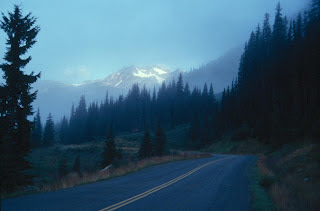 Above: Serenity on the Duffey Lake Road

After that is the Duffey Lake road over to Mount Currie. There is nothing but wilderness, thick bush, raging rivers, nobody for sixty miles or so. It was like a cocoon of forests, left alone by man, except for the road which snaked back and forth over a river on single lane wooden bridges. Everything got very still through this stretch, except for the forward movement of my van heading toward the approaching dusk. 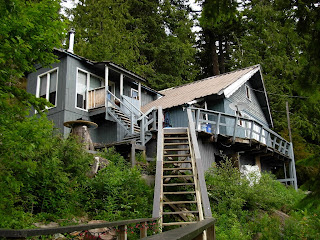 Above: Old home cabin in Whistler, BC
Below: View from my old porch of Whistler Mtn. The ski run to the left will probably be the Men's Downhill course for the 2010 Olympics 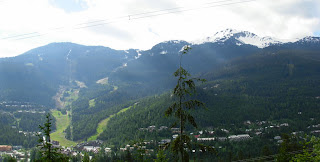 Eventually, you come down to the Pemberton valley, and I cruised through to Whistler. My old neighbour, Dave was waiting for me with steaks to grill, and plenty o' beer to drink. For almost 5 years, Dave and I lived in separate sides of the cabin pictured above. Our backyard was Sprout Mountain and frontal view was Whistler mountain across the valley, with Creekside down below.

Those five years were a whole chapter of my life path, and too long to cover here. But for the next four days, I hung out here, in the village and around Whistler valley. Lots of friends, lots of drinks, lots of good times. The folks here are high energy and fun, fun, fun. Only inevitable responsibilities took me away from here, but, I may head back some day.

The last ride. A short drive down to the coast. It was late October '07, the nights were getting longer and cooler; I could feel the change of the season. With the night falling, I drove to Vancouver. Thomas called me to meet him at the Jimmy Dean Tavern. As I stepped out of the van into the light evening rain, it hit me. Time to stop. Home, after 11,300 miles, home again in Van-Coo-Coo. I walked through the door and bellied up to the bar. A modern nomad. Back home from the road.
Posted by urban vandweller at 6:58 PM