Why am I a Vandweller?

People ask me this all the time. Why would you want to live in a van? Don't you miss the comfort and security of an apartment/house? The truth is, there are many reasons why I live like I do.

1/ Adventure - All my life, I've craved adventure. I've always admired the notion of exploring distant mountains, sailing around the world or living in a back country cabin. Although unable to do all that, I knew the composition of my life path was going to be different. At one point 25 years ago, I decided I didn't want the 'norm'. You know; college, career, marriage, house with white picket fence in the 'burbs', and so on. I wanted to really enjoy living my life; exploring, experiencing, travelling around a whole bunch. I didn't want to spend my life working away just to pay the mortgage and car payments, and put off my desires until I could afford it. 'Now' was the time to live, not some point down the road. 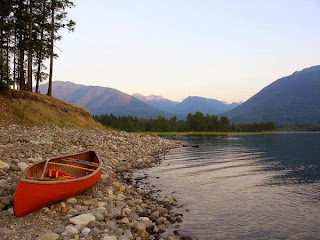 So, I left behind my engineering career and city life in Toronto, ON, and headed West. I landed up working in the mountain resorts of Alberta, namely Jasper, Lake Louise and Banff. Resort work life revolves around the 4 month ski season and the 4 month summer season. Which meant every 6 months, I had a 2 month holiday. This is when I became a part-time vandweller.
I bought a VW van, outfitted it with part of a Westfalia camper creating 'Waldo', the Magic Bus. Waldo and I travelled all over Canada and the States during those 2 month holidays. I had cheap transportation and accommodation; I could go wherever I wanted. Even when I was working and living at the resort hotels, I could getaway for great weekends.
2/ Rental Cost and Choices - Years later, I was living the 'norm' in Vancouver, BC. You know; career job, fancy apartment, bills and such. At one point, I realized that I had drifted back to a lifestyle that I didn't really want. I didn't move out West to live in a big city, I wanted an alternative rural lifestyle. It was time to get the hell outta' Dodge. I had just bought an Aerostar van, for weekend camping trips. So, I streamlined my belongings and picked up a excellent 6 month work contract in Whistler, a resort 2 hours to the north.
When I got there, I was faced with an accommodation shortage. Apartments were scarce and very expensive. Being the warm part of the year, I camped out in the van while looking for a place to live. After a while, since I was only going to there for six months, why didn't I just van camp for the duration. I was taking showers at the rec centre, tailgate cooking at parks or eating at friends'; making do just fine. I would have a extra net savings of around $650/month, which also helped 'sell the deal'. I became a full-time vandweller.
3/ And So it Goes - Once things were finished in Whistler, I got a lucrative contract back in the city. Once again, apartments were pricey and scarce, while rundown and not very appealing. I considered every alternative, while couch surfing with friends. I was on the internet, and came across vandwellers.org and more vandwelling websites. The choice was obvious; by adopting some stealth mode to my vandwelling routine, I could do it in the city. Again, the savings were too hard to pass up, and the challenge was intriguing. 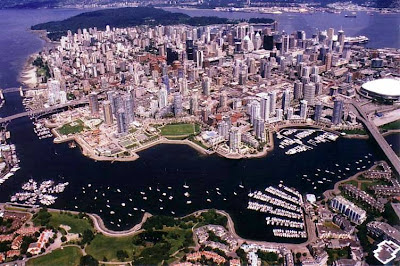 Above: Vancouver's downtown core
4/ The Modern Work World - The era of working for one employer, for the majority of your working life, is long gone. Corporations, governments, contractors and resorts hire employees on short term contracts (up to one year), and for many of us, it can provide a very lucrative and advantageous lifestyle. You get lots of variety, with different challenges, environments and coworkers all the time.
But, it often requires moving locations from one city to another, over to the islands, then to a small town or maybe a resort. It doesn't make sense to establish a permanent home; you would be leaving it behind all the time. If you try to setup an apartment as you go, you gotta' drag around furniture, order utilities, sign leases and so on. Too much hassle and too much wasted money/time.
By being a vandweller and working in this modern environment, I have a symbiotic lifestyle. For me, it just makes complete sense. I can go and live/work, whenever and wherever I want. I have unlimited choices with no shortage of opportunities.
5/ Independence - Because of the freedoms explained above, I am in a position of great abundance. I work when I want to; I am building savings towards the future; I enjoy time off for personal pursuits that I used to dream of. If I don't like a job or area, I can just leave; I have nothing holding me back. I luv it!
Everyone will have their own personal reasons for however they want to live, and I certainly have mine for being a vandweller. Sometimes, I think about settling down in one area, and that will happen one day. But for now, it's the open road and the next opportunity. Roamin' the land like a modern nomad. So, what's it going to be for you, it's your call.

Posted by urban vandweller at 1:47 PM

Hi Vandweller. I liked reading this and have been reading some of the rest of your site. It's great. Nice to see a fellow traveller explaining why they live in a van.

I liked your sections on keeping warm. I have found that I pretty much do the same as you. Keep warm in bed or through clothing and only occasionally heat my van. Thankfuly, in Australia heat is more of an issue than keeping warm.