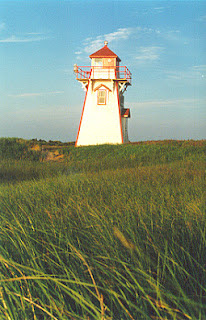 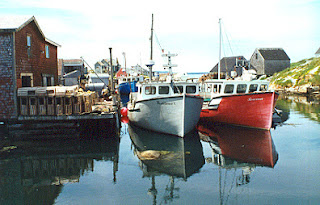 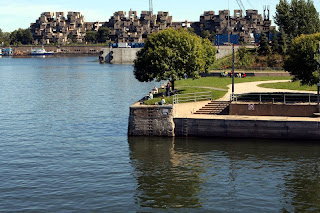 At the end of summer '07, it was time for a road trip. But, just not any road trip. One that would take me from coast-to-coast in Canada. 11,700 miles long with the side trips. $2400+ fuel cost. 2 months. The Great Sentimentality Tour '07, a country-wide road cruise!

Although, the trip was from the west coast to east coast and back again, I'm just gonna cover random thoughts from the return trip. The stimuli was overwhelming; a never ending cascade of new vistas and familiar sights. 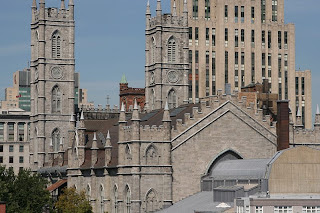 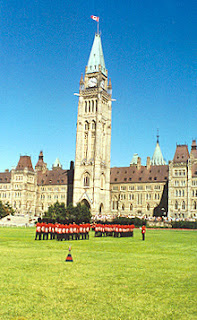 The return swing started in Prince Edward Island (PEI). This island province is the smallest in Canada, with both farming and fishing communities. PEI potatoes and mussels are famous through the land; I've eaten tons of both. The island is very progressive with trying to create renewable energy sources. On many farm fields above the crops, you'll see large wind turbines creating electricity. By 2020, they project they will produce almost 30% of the power needs of the island by wind power.

A trip to the East Coast wouldn't be complete, without recognizing the fishing heritage of this region. When John Cabot, an European explorer, first came to this area, it was said that his ship was slowed down by the fish above the Grand Banks! Although many of the fisheries have been closed due to depleted stocks, they still go out. In Peggy's Cove, Nova Scotia, there were fishing nets spread across the ground, being repaired and down the road, lobster traps piled high on the docks. Nothing tastes as good as fresh lobster cooked right away, with butter and plenty of beer.

In Halifax, Seamus and I paid homage to the old site of a favourite hallowed hall. For me, the Misty Moon Tavern was a 'classic' bar; I saw the Tragically Hip play here, many years ago. You could get up really close to the stage, and see everything. The locals were super-friendly, and good times were had by all. There is another bar in it's place now, but for me and others, you could never replace the Misty Moon (sigh).

Francine laughed with me over old times and drinks on a street cafe in Moncton, New Brunswick. I had to struggle with her thick accent; her heritage is a mix of French and English Canadian, so she thinks in French, and hesitates before she speaks. It was great to visit her in her homeland, for I met her originally in Jasper, Alberta (3,000 miles away). We took a side trip to the Bay of Fundy, a picturesque coastal area, and ate more lobster! Mmmm!

In Montreal, Quebec, I met up with Jenny on the Old Port waterfront. We went across to the man-made island, which was the original Expo '67 site. I had visited the exhibition, when I was nine years old, with my family. The original Habitat buildings were still there; they were a futuristic design for apartment dwellings (see photo above). It was bizarre to see them, a distinct memory from my childhood. Montreal is a vibrant and cultural city, with great restaurants and lots of entertainment. I wish I could have been there for the annual Jazz Festival. Oh, well.

To finish off the eastern portion of the trip, I visited the nations' capital, Ottawa. Butsy still lives there, and we crossed the river back over to Hull, on the Quebec side. We reminisced of how we used to party the Chaud', another former hallowed dance hall in the Eastern Townships. No kidding, this bar could hold around 1,500 people upstairs, and 400 downstairs in a separate bar. Bands would play 'til 3 or 4 in the morning, performing 5 sets, not just 3. The dance floor was huge, and we'd rip it up there, whenever I visited Butsy and crew. Those were fond memories (another sigh).

No matter where I went, I was always struck by how beautiful eastern Canada is in the late summer. There were familiar sights from my early adulthood and I got to spy many more passing by my van windows. The ability to just go wherever and whenever I felt, because I travelling in my van, was freedom to no end. To have friends, throw open their arms and homes, was humbling. Maritime hospitality is still number one in my books!

The next swing of the trip is my native homeland, Toronto and Southern Ontario. 'Bye now.
Posted by urban vandweller at 1:24 PM